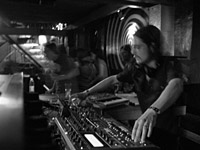 With a firm belief that soulful melodies, ass-shaking basslines and debonair drums are at the core of a quality tune, Sneak-Thief's tracks deftly reside somewhere between melancholic mechanical music, electrofunk and R n' B.

Since 1997, Sneak-Thief has performed throughout Europe and North America with his all-synth, no-vinyl & no-laptop live act. Lindsay-J joined Sneak-Thief's live performance in 2002 and has since collaborated on various Sneak-Thief projects.

In 1999, Sneak-Thief founded Gingerbread House Records as an outlet for his raw electro-funk and freaky beats.

Lindsay-J has provided Sneak-Thief with unending musical inspiration, not only through her compositional expertise, but also with her soulful vocals.

In 2002, Sneak-Thief began a unique collaboration with Stephan Busche, aka DJ Gitano, and one half of Fancyman (Gigolo, Lasergun). The sound that emerged was a gritty combination of E.B.M. and italo-disco. Their project is called Polygamy Boys.

Simply put, the Gingerbread House was a freaky place - residents and frequenters of the Gingerbread House included fellow producers John Rolodex, Scott Cartridge (aka Lazersnake), Lindsay-J, Josh Stevenson (member of Jackie-O-Motherfucker), Synoflex, LT Irie, and Magic Marker. There were no less than three separate music studios in this house, not to mention, a 1500 Watt sound system in a room that was but 10' by 10'. Thankfully the house was made of brick, otherwise arrests may have been made due to noise complaints.

The original Gingerbread House has now been demolished in order to be replaced by some overpriced, piece of shit, rich-ass seniors complex. Oh well, the place was known to be infested with mice, and cost a fortune to heat during those long cold Canadian winters. But I digress.


GHR embodies raw electrofunk beats that strike fear in the hearts of evildoers and chump producers.